Just this. Hands Up, Don’t Shoot and the Social Contract

There is a video going around that gives me chills. It’s not due to the graphic nature of the video. I think I’m beginning to become as numb as the rest of the world. My heart hurts for it when I see it and I do my best to spread good in my own circle of the world to try to keep the ground from sliding further into the decay that we see around us. The media the tells us that the qualities of love and acceptance are losing ground to oppression and consumerism. That love for others and community is losing ground to jobs that destroy our way of life and enslave us to becoming dependent upon it to survive. Some of us are doing well. We build houses and dreams on what is and turn a blind eye as those “below” us slide further into despair. Looking forward, not feeling but fearing of the pit that we won’t see if we don’t look down. Just because we don’t acknowledge the problem doesn’t mean that there isn’t one to see. I don’t know about you but I’d rather fight the battle while I have the advantage than wait until the desperate sink ships as more begin to drown. That’s right, it’s “We”. We are in the bigger picture. We’re individuals of a whole. It’s this diversity that keeps us alive through plagues, innovation and necessity. You never know who you’re going to need and what situations needed to be overcome for them to have the ability to help you, should you so need it. Don’t judge. We each have our own paths to travel. Some prefer to take paths that have been tested. Some forge their own paths due to vision or necessity.

Back to the video, why does it bother me so much? We grow up with the rules of the social contract of our society. Bad people get in trouble and go to jail. Do wrong and you’re going to be held accountable to your actions. No one is above the law. This video bothers me because it’s a take on how the world is being viewed today. I’m hard pressed to contradict it.

This video shows us examples that are running rampant in social media. The idea that there is no fair in the world today. That justice can be bought through monetary or popular affiliations. We’re being told that those who create the laws only do so to take advantage of us. We’re told that those who enforce the laws are breaking them. As citizens we grew up thinking that no matter who you are, what your crime, color or religion that we are to equal and assured of our rights. Hands up and a peaceful discourse should lead to a peaceful arrest. Today it seems that breaking the law or seeming to break the law is enough cause for us to be targeted by the police for any number of brutalities from rape, to coercion, to murder and being cannibalized. The bind eye of police brotherhood has shown that those assurances that we had grown up with that rules must be followed for our own safety and the rules of those who protect us no longer hold true.

One example in the video is the “Hands up” gesture. When used this gesture means that no matter your crime, color or offense that you will be peacefully taken to jail so that the law can be served so long as you don’t put up a fight. That we’re innocent until proven guilty by law, evidence, a group of our peers. Kids no longer want to grow up to be police officers as often as they had in the past. The teens that speak to me now are vigilant, watchful and wary of police. The police are likewise wary of their citizens. It’s becoming a cycle of fear aggravated and escalated by the use of force. Each time the police do nothing to stop each other we can’t help but see it as being condoned by the whole.

Where are the videos of one cop stopping another cop in the act? Those are the videos that should go viral. Those are the ones we need to see if there’s any hope of losing ground but for that to happen, it has to happen. It has to spread like a treatment to counter the disease we see. We’re going to lose a generation to despair and the idea that our treatment is not due to our own actions but rather by the lack of accountability, responsibility and fear of those who should protect us that we now are beginning to fear. Well, not me. It doesn’t have to happen to me for me to see where this is going to go. I’m just glad that in our own support, here in Gainesville, the crowd of support was as mixed as it was united and the Chief of Police was sincere in his letter that his department is here to “serve each and every person in the City Of Gainesville”. I hope your officers can say and have displayed the same.

It’s a dangerous time to be a police officer. The way things are headed right now it seems that now is the time to have those who truly hope to serve and protect to find each other and stand up for the integrity of their position. There is a bright side out there. Every one of us has a spark of it. We can use it to add to the light or start a fire. It’s all in how we use our individual energy. I’m sharing the video underneath this piece. It is graphic. You can fester in hate or be part of the change that save us. It seems that it couldn’t save the rapper :(, but that just proves that there needs to be a change.

Hold true to peace and the best of who we are. No matter what comes, if even the smallest seed of the qualities that we treasure survive; we win. Together, just this. 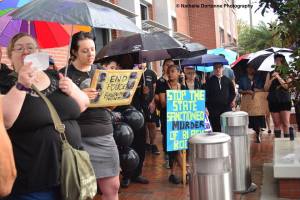 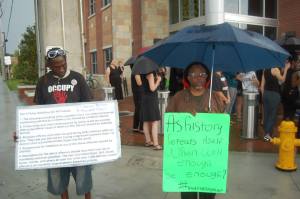 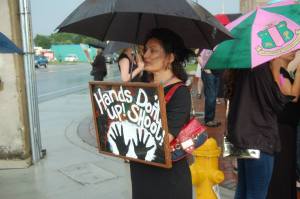 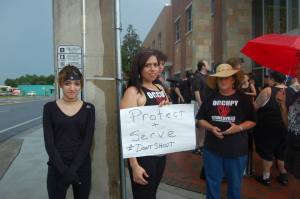 The Video that began my rant today

The beauty of the word is the subconscious nature in which it finds it's way upon our lips or past our fingertips. The stroke of our fingers on a pen or a key or the softest breath carried past our lips have such an impact that friends, relatives and strangers can carry such words with them in their minds, to come along with us on a journey into our thoughts. In our darkest hours we must always remember to remain conscious that people have lived and died by words. I am a wife, mother, confidant and friend to many. There are no strangers in my world. Only friends that I have not yet had a chance to know. Sensually minded, self-educated, street wise, natural living, power tool wielding, minimalist mom with transcendental aspirations.
View all posts by Laura DeLucio Gross →
Image | This entry was posted in Mirrored reflections and tagged activism, change, diversity, ferguson, future, graphic, handsup, hope, just this, justice, losing ground, police, police brutality, race, rights, social contract, social media, spread the treatment, video. Bookmark the permalink.

2 Responses to Just this. Hands Up, Don’t Shoot and the Social Contract